Block 3 of Hearts & Wreaths has been appliqued! It's so relaxing to applique these leaves in the evening. I'm getting into the routine and they applique fast! 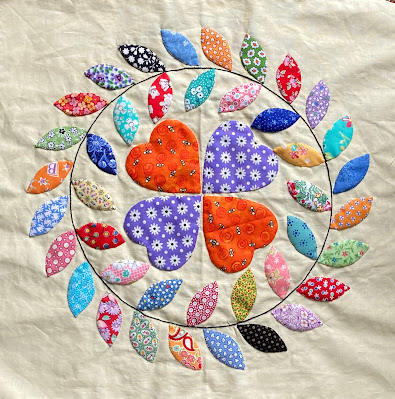 Block 4 has also been finished. The darker hearts in the center of this block slightly overshadow the leaves. When all the blocks are sewn together into the flimsy, they will look fine though. 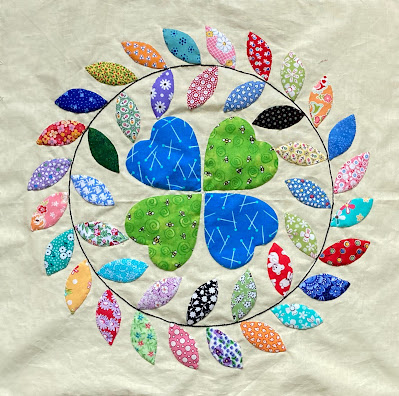 Some people like to see what the back of applique looks like. You can't really see much, just the colored thread. I haven't cut the background fabric out behind the hearts. As of now, I'm planning on stitching in the ditch around the hearts, not in the hearts. I'll have to decide for sure before I put the quilt in the quilting frame. If I would decide to stitch inside the hearts, the extra layer of fabric makes small stitches challenging. 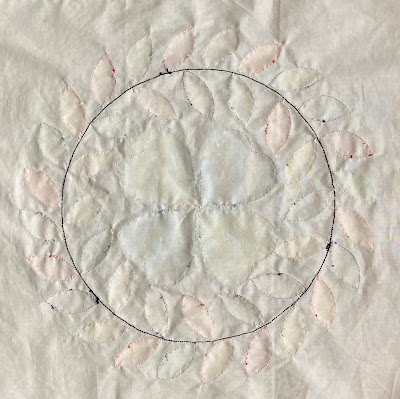 I've said I know how I want to quilt this quilt eventually when it's finished. All the leaves, hearts and black embroidered circle will be stitched in the ditch. It's the space where the four corners meet that I'll quilt some special designs. I see some feathers happening in those spaces. 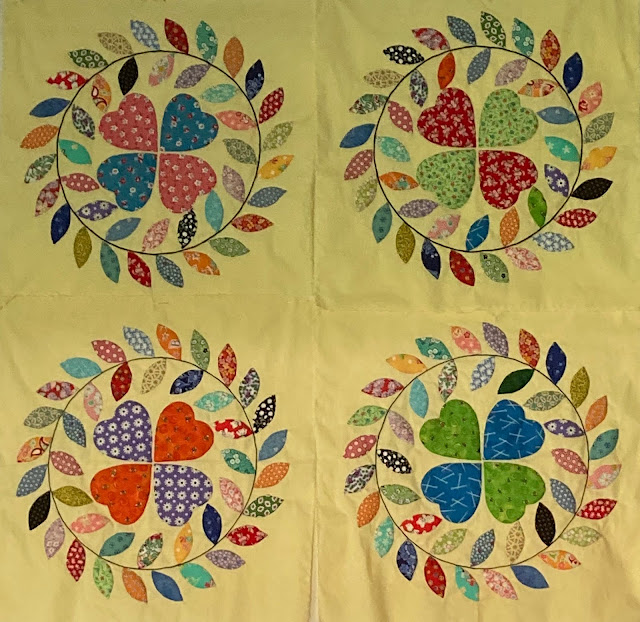 If you look at the circle embroidery of the top two wreaths and compare them to the bottom two, the top circles are slightly more bold. Those two were embroidered using a chain stitch. This was an experiment to see if back stitching showed as well as the chain stitch, it doesn't. The rest of the blocks will be embroidered using the chain stitch.
I had planned on appliqueing 4 blocks then deciding if I want to make a larger sized quilt. I enjoyed appliqueing the first block so I went ahead and purchased all soft yellow fabric I'll need for the rest of the quilt.
It will be awhile before I have block 5 completed. I want to cut the background fabric into squares for applique and then zigzag the edges to keep them from fraying.
After that, I need to mark the circles for embroidering and then the hearts and leaves.
I'll keep on appliqueing 4 blocks at a time but I'll also need to cut leaves for those 4 blocks. My friend Elaine is also creating this same quilt. She suggested it would be a good idea while prepping the leaves for the wreaths, to also cut leaves for the outside border. Those leaves are a different size than the wreaths.
There are also small leaves in the border but many of you gave me the great suggestion to embroider those when I first showed this project which is what I plan to do.
The only problem with this project is I'm enjoying myself so much that I've been neglecting my hand quilting! I'll have more time to quilt Welsh Beauty until I get all the prepping completed.
Here is a link to more information about the Hearts & Wreath pattern.

Oh, these hearts and wreaths are gorgeous, Gretchen! Love all those 30's fabrics! These are so happy; they make me smile. I don't wonder you are having such a wonderful time appliqueing these.

I just love these blocks Gretchen! I can’t wait to see how big this grows and changes as it grows… I could look at your appliqué all day long!!! Thanks for putting it up here!
Enjoy or take a break to hand quilt today a bit! Lol
Kathi

I hope to spend sometime hand quilting but I need to mark a square to take along to applique group tomorrow at Elaine's. I won't be appliqueing though, just embroidering the circle. I love this quilt!

Wonderful applique, Gretchen. Look at those points and curves!!
The four blocks look amazing together.

These really are beautiful in a scrappy format!

Very pretty and what an interesting difference between the chain and back stitch for the circle.

the wreaths look really pretty and kind of delicate looking if you know what I mean - soft and pretty!

Your applique wreath blocks are gorgeous! I love the combination of fabrics you are using!

I love these appique blocks. I like the feather idea for the space where the blocks meet. Enjoy your stitching. Looking forward to seein more of Welsh beauty also.

Gorgeous appliqué, as usual! I can see why it is addictive and hard to put down!

I've always loved this pattern, and you are really bringing it to life! Beautiful fabrics, beautiful applique!

Really pretty! I like the idea of quilting feathers too.

Beautiful applique, and I love the fabrics you are using! Always such a pleasure to see your work Gretchen!

You're right the centre hearts in the bottom right corner doesn't distract once it's put with its fellow blocks. Your fabric colour choices are lovely too.

I need you added to my list, Gretchen, as I learn something every time I visit. I was wondering how that line was so thin-zigzag on the machine, I thought, and what a great idea to chain stitch it. I have just purchased a lot of pale yellow for a project of mine so it's nice to see someone else use such a shade for background. Looks wonderful to me and your applique is immaculate of course.

Your applique is making me long to start a project of my own. I should just make the time to do the prep work and get on with it!

Your four blocks are spectacular! I can't imagine all the hours of prep you have completed and all the hours remaining!! It is a beautiful quilt.

These blocks are so bright, cheerful, and beautiful! I love the great variety of fabric in the leaves. What size are the blocks?

these blocks are gorgeous and i so love that pattern...thanks for the link

Very beautiful. You have infinite patience and the result is lovely.