Block 4 of the Wildflower Woods BOM is called Swamp Angel. Gene Stratton Porter had the nickname of Swamp Angel which is why the designer used this name for the block. 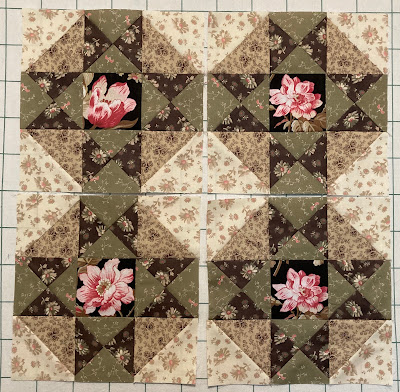 Evonne gave very clear directions in the piecing of this block, it's not easy to make a 9-patch based block finish at 10" but this one will.

I cut the QST's first then the HST's which was a bad idea. I cut part of the HST's into QST's! I realized my mistake immediately after I cut them. I made a narrow seam, sewed 2 pieces together and it worked out fine in the end. My quilt isn't going to be perfect but you don't see the seam unless you get your nose right up against the block.

It's a good thing I didn't add the suggested broderie perse applique to the light triangle corners of the center. The floral fabric was missed when they bagged the fabrics for block 3, I had to cut it from the leftover fabric used in block 1.

Linking to Put Your Foot Down, Needle & Thread Thursday, Peacock Party, TGIFF!, Finished Or Not Friday, Off the Wall Friday, Patchwork & Quilts

Posted by Gretchen Weaver at 5:30 AM

I just love these blocks on your bom… your fabrics are perfect whatever other name this block may have! Kathi

Your blocks look just lovely Gretchen, and I can't see your extra seams. When your quilt is finished they will disappear completely.
I'll look forward to seeing the next blocks when you make them!
*hugs*
Tazzie
:-)

I don't see any extra seams - it all looks great. I am impressed that the 9-patch is going to finish at 10". It is amazing that your blocks look perfect and they are all right size! I doubt that mine would. ~Jeanne

I can't see extra seams either so they really blend in wherever they are!

Very pretty! and I love the flower in the center

I have no idea what the traditional block is called, but I call it Beautiful! The fussy cut flower in the center is awesome!

You must have performed some magic to get those blocks to turn out 10 inch finished. They look terrific.

I thought Swamp Angel was the traditional block name. I swapped some long ago. I always thought it was a weird name because when I think of swamp I think of things like Creature of the Black Lagoon and not angels.

I like the fussy cut flowers in the centers. Very pretty block.

Lovely blocks. I enjoy the variety of flowers in the center. Thank you for linking up with me for TGIFF.

Love the fussy cute flower in the center, Gretchen. I can't see any extra seam. Your blocks are beautiful as they are.

Lovely blocks! They look very pretty, and the flowers in the centers are shining. Extra seams? Nope, can't see any of them, your blocks are beautiful as they are.
Thank you for sharing, and linking up ;)

The blocks are very pretty and this is a quilt that is different from most of yours, but I think it will beautiful! Hugs

For the love of geese said...