I made sure I pieced the next two blocks for the Flower Patch sew along before I went to retreat. And I wrote the post so it would be ready to go! 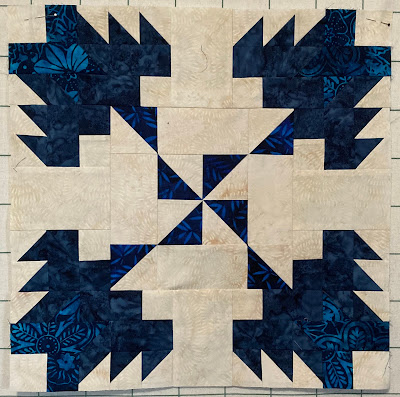 I added two new blues to the block. I thought I had a lighter batik blue but I guess that got used somewhere else. The pinwheel fabric hasn't been used before. Also the outer edge of the flower is a new addition.

Here is block 5. Block 5 is a repeat of block 2 which is the cardinal block. I made a few changes to my block. I added more of the darker red and changed a placement. It didn't turn out like I thought but I'm not taking it apart and redoing it! 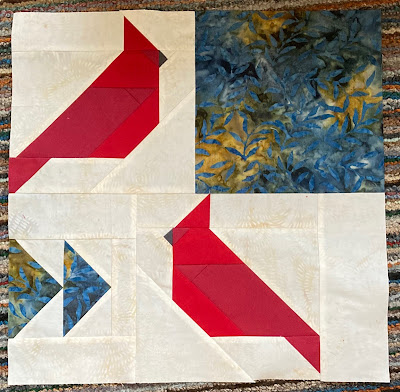 I also positioned the segments of the block differently to make it slightly different then block 2. 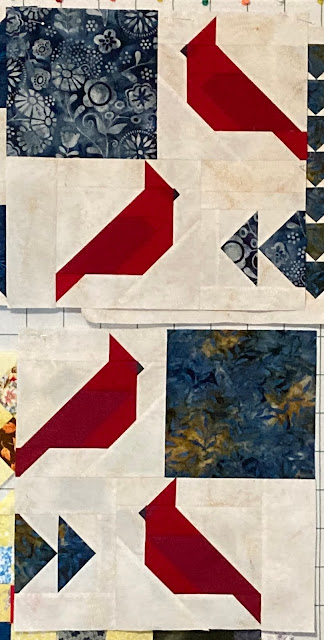 I pinned the new block to the display wall and took a picture of both cardinal blocks. They're pinned over other projects which you can see the edges peeking.

love your cardinals, I have one quilt that I put one in a long time ago - it might be time to do another

It's turning out good. I just found this Mystery Quilt, but it's too late to join. Darn. I like the blocks.

These cardinal blocks are terrific. I'm always drawn to projects that include them. One day I'll need to make one for myself.

I really like the blog and I hope people will have a new blog, thanks for the blog
free spins

Beautiful cardinals, I just think they belong in quilts! I love your pretty blue batiks.
Thank you for linking to To Do Tuesday!

Such beautiful blocks! These will make a great quilt. Bet you're having fun with this one. Thanks for sharing on Wednesday Wait Loss.