I'm slowly getting caught up on the blocks for the 3030 quilt. In the center of the quilt is a lovely applique medallion. I am slow at hand applique and I've decided not to add the center medallion, I can piece the blocks much faster than I can applique. This decision means I'm going to need more blocks. I've started making double blocks of each block, unless it calls for multiple blocks already. As of now, I am still planning on making the individual applique blocks but that plan may change too. 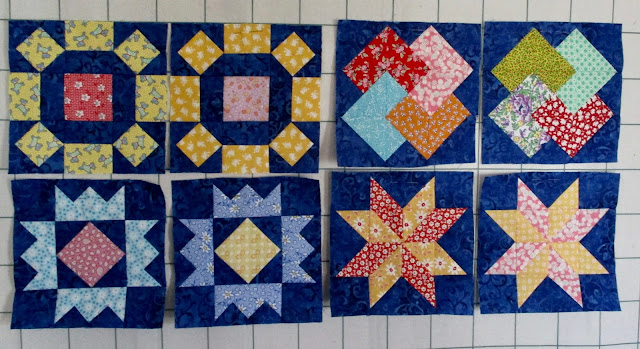 These are the most recent completed blocks. I've never pieced a card trick block before. It was very easy using the foundation paper pieceing method.

I've been binge watching the Great British Baking Show while I'm sewing. The programs put me in the mood to bake, fortunately without Paul Hollywood to critique my results.

First are 4 loaves of whole wheat sour dough bread. My bread recipe is based on this recipe from King Arthur but of course I've made some changes to my recipe and also made a larger quantity. This is a soft bread with sourdough starter as an ingredient. 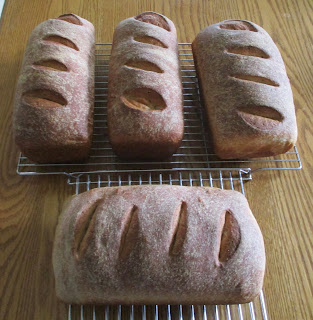 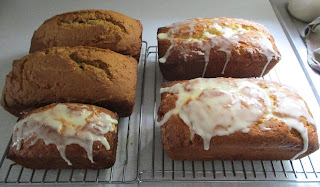 I also made two loaves of pumpkin quick bread and a new recipe called orange yogurt quick bread. Both recipes are from the Best of Country Breads published by Reiman Publications in 2000. I cut open the orange yogurt bread first since it was a new recipe. It was delicious! My glaze didn't drizzle very well but that's fine with my family, the grandsons don't care.

Email ThisBlogThis!Share to TwitterShare to FacebookShare to Pinterest
Labels: 3030 Quilt

Hi Gretchen! Oh how I wish I could smell those breads and sneak a small piece of the orange yogurt bread. YUM! They all look delicious. That's so funny - I just made The Rolling Stone block which looks very similar to one of the blocks you've shared this week. I've made a queen-size quilt using Card Trick but it wasn't paper pieced (thankfully for me as I'm not great at PP). It was an Eleanor Burns pattern so it was a while ago! Thanks for linking up today! ~smile~ Roseanne

I love that royal blue fabric in your 3030 blocks and all your blocks turned out great as usual. Your bread both the sourdough and sweet breads looks GREAT too! So glad you blogged about these things :)
Kathi

Your blocks are very striking. All of that bread looks sooooo good! I think I can smell it 😉 ~Jeanne

Pretty blocks! That bread turned out great - bet they were yummy! Love the drizzle on breads. Hugs

Wow, you're just like me! Love the GBBShow and am waiting for the new season to stack up some episodes so I can binge, and when the mood strikes to bake there is flour swirling through the air in the kitchen, then in fear of eating it all I stock the freezer. AND I love hand applique and hate piecing so there we differ. This makes me think quilters should team up and trade their desired way of working and share! Love the colors for your quilt!

Your 3030 blocks are so pretty with their happy prints and darker background! And homemade bread - there's really nothing better. Enjoy!

the bread looks so good and on another blog someone was talking about birthday cakes - now you all have me in the baking mood and I don't have time today!

Good for you to find a solution to you applique dilemma! I'm not a yeast bread baker, but love to do quick breads. Banana, zucchini, pumpkin, etc. I'll look for an orange yogurt recipe. That sounds really good!

Wow, your blocks are great and man, you are just whipping them out!1 You'll be caught up in no time! Just yesterday I was telling my brother I would love to try some whole wheat sourdough bread because my brother has a ton of whole wheat grains in his storage supply!! Thanks for posting your lovely loaves and for the recipe!! The orange yogurt bread sounds delicious!!

I think even Paul Hollywood would say those loaves look pretty great! Wish I could sample the orange yoghurt bread! -Marlys

Your breads look amazing - I think Paul would be impressed :) And your blocks are gorgeous!

Wonderful progress, beautiful breads! Take the time to you-tube, City Bakes with Paul Hollywood, I imagine that is where he gets some of the ideas for the contestants to bake on the series you are watching. I'm still in season 1 of City Bakes and it is like traveling the world with someone who bakes!

Love the bright colors of your blocks. And those breads look delicious.

Your loaves and your blocks all look wonderful. Multi-talented. Thanks for linking to Clever Chameleon.

Great looking blocks. It will be interesting to see what you decide for the setting. And I'll take a slice of that delicious looking bread please!

Your blocks look beautiful and as yummy as that bread. Thanks for sharing on Wednesday Wait Loss.

Those king arthur recipes never disappoint! I need to get my sourdough starter going again. :)