I've come late to starting the 3030 BOW project. This isn't a mystery, Gay has revealed how the blocks will be set so I've decided to join in.

I'm a boring person, it seems the background fabric of my projects are always a light color, usually white. I've decided to be daring with this quilt and my background fabric is a dark royal blue. It's the same blue I used in the border of blue Stars Around the Garden.

I wasn't 100% sold on this idea but block 1 has been pieced. I was disappointed, the fabrics didn't work together. So I made another block, scroll down for that one. 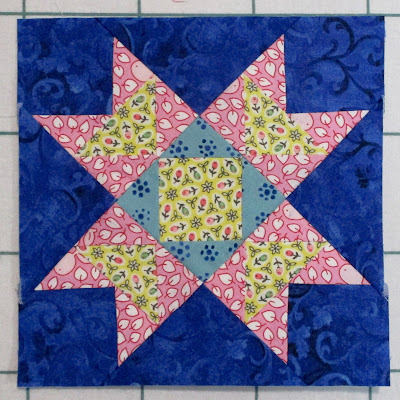 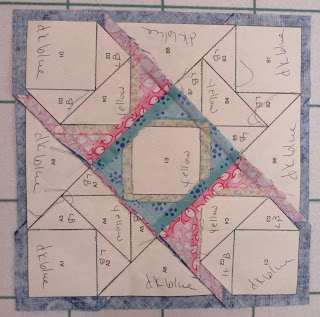 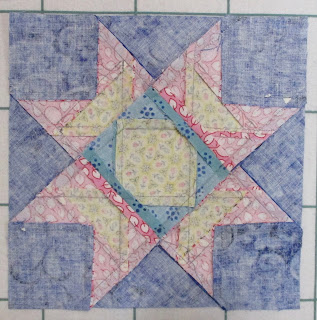 I've included pictures of the back of the block because people often ask what the back looks like when you foundation paper piece, the second photo has the papers removed. 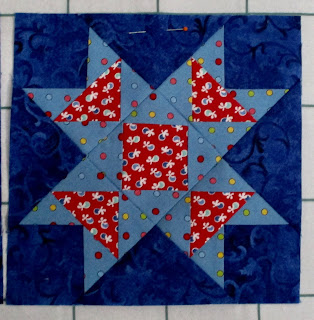 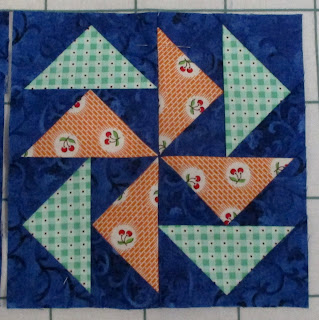 Here is block 2. The orange and green are brighter, I guess I just don't have a good enough camera to pick up the true colors.
Block 3 is an applique block, so it, and all the other applique blocks, will have to wait until after I finish the applique for the borders for Stars Around the Garden. 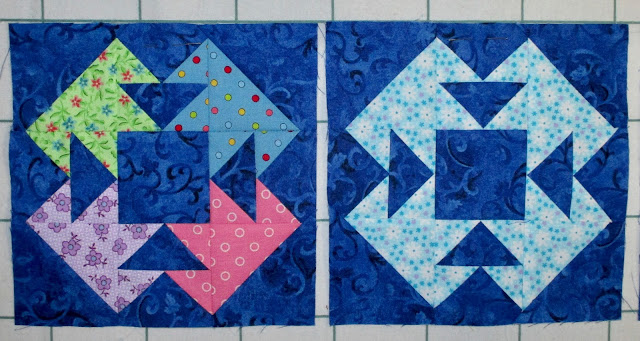 Block 4 is a T block. It was fun so I made a second block in two colors this time. I know what the blocks are through block 19. There is one block I didn't like so the second block 4 is the replacement block. 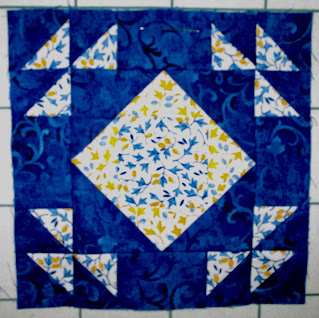 Block 5 is also completed.  I don't know how long it will take me to get caught up on the blocks but I'm going to keep piecing and I'm going to keep using the blue background fabric.
These blocks finish at 6".

Email ThisBlogThis!Share to TwitterShare to FacebookShare to Pinterest
Labels: 3030 Quilt

I'm also boring and always use white as my background... but doesn't it look so crisp and clean??! But that BLUE is gorgeous as the background. You're doing a great job choosing contrasting fabrics that make the patterns pop.

Hi Gretchen! I guess I'm in the boring club as well. I almost always use white or off-white as my background go-to of choice. I have been telling myself to try something else (my monthly color blocks use black) like gray or blue. These blocks look great to me, especially that last one with yellow/blue flowers or leaves. Can't wait to see them all come together. Thanks for linking up today. ~smile~ Roseanne

I guess I need to get boring on my 3030 because I do not like white. Your blue background is very pretty and will give your quilt a very different look. Going to be beautiful. Hugs 🤗

I like the blue background a lot. Sew away.....

I love your dark blue background in the blocks. I often use white too and decided a while back to get more creative with color. You pretty blocks remind me that colors other than white are good! Thanks ~Jeanne

Your blocks are beautiful!

I'm not saying anyone is wrong for using white fabrics, I just wanted something different this time. I am very happy with how the blue looks. I just need to make sure the fabrics I use with the blue are brights.

Love your gorgeous blue background. I also quite liked the first block, although it clearly wasn't the look you wanted. Your quilts are always stunning when put together, I'm sure this will be awesome as well - maybe you'll get hooked on darker backgrounds.... I like them because I hate dirt to show on my work once the quilts hit the bed. Thanks for linking to Colour & Inspiration Tuesday.

Love the blue background! Kudos to you for being brave and going with your gut. Thanks for sharing on Wednesday Wait Loss.