While I've been working on Double Delight, I've been running two leader/ender projects under the needle.

The first project is Indian Hatchet. I've accumulated quite a few small blocks. I've cut the white corners off the backs, now I need to get them trimmed to 2.5". 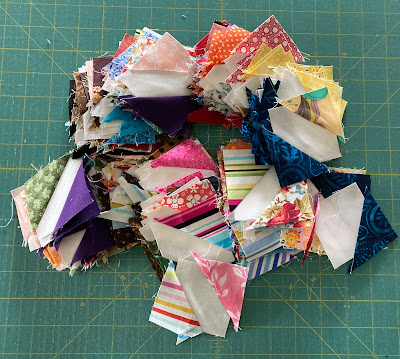 I don't understand why they're called Indian Hatchet, they don't look like any hatchet I've ever seen! I've made blocks similar to these as an autograph block.
The second project is String X. String X is a Bonnie Hunter pattern. I had a stack of stringed blocks so I counted to see how many more I needed. I'm using old muslin for the foundation and cut exactly the number I needed to make this quilt into a 60" by 80" quilt. 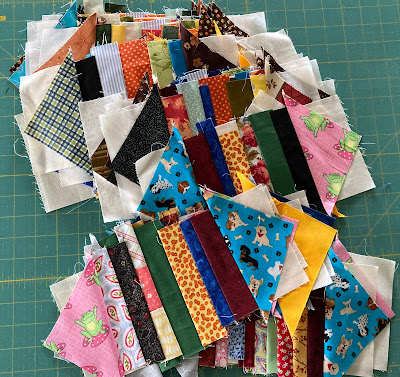 Those string blocks have all been sewn now they also need to be trimmed.

After the string X blocks are trimmed to 4.5" by 10.5", the corner point needs to be cut on the top and bottom of the strip. 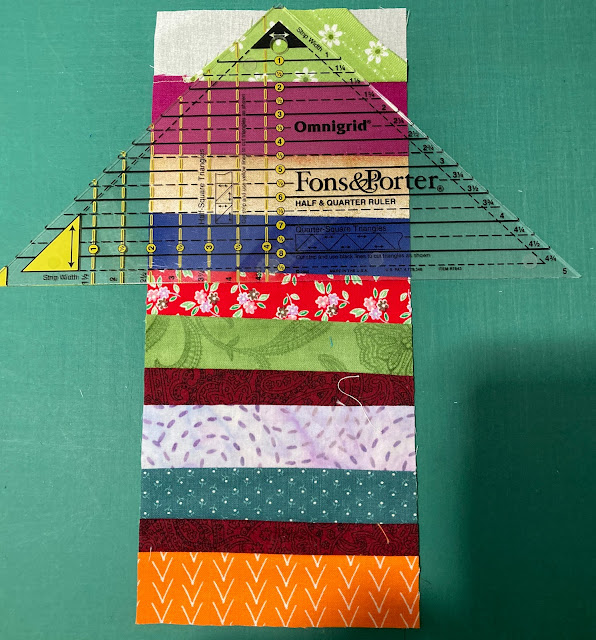 Bonnie has directions with her pattern how to cut the points. I don't do it how she says, it's too complicated!

I don't have a lot of rulers but the ones I do have, pay for themselves with their convenience. One of my favorites is a Half & Quarter ruler. My ruler is a Fons & Porter brand (purchased with a 50% of coupon at JoAnn's) but there are many other brands available.

I simply lay my ruler on the trimmed rectangle with the 2" mark along the left side of the block. I make sure the black mark on the top of the ruler is even with the top of the rectangle, then cut the 45* angle.

All of the rectangles have been trimmed and are ready to have the side triangles attached. 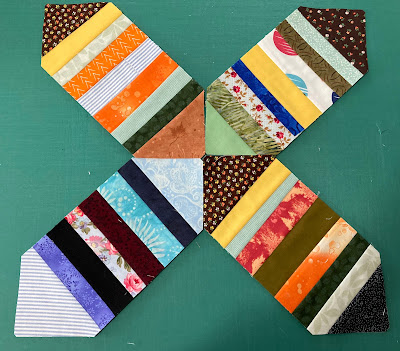 My mother has been gone for 15 years but I'm still using her fabrics. I dug deep in a box and pulled out this old dark red fabric. I think there is enough for all of the blocks. That brown calico corner piece is also from her stash. 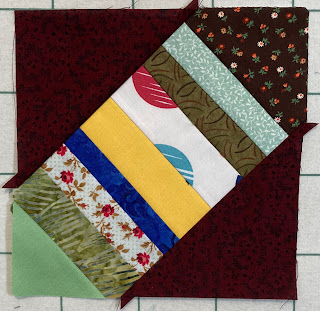 This project has advanced to the next stage of leader/ender. I decided to trim the string X blocks because there were a LOT less of them than the hatchet blocks.

Posted by Gretchen Weaver at 7:00 AM

I enjoyed hearing that you are still using your mother's fabrics. I ran out of my mom's fabrics a few years ago. It was always fun to use her fabrics - a little like we were working together. ~Jeanne

that's interesting that you are using your stash and your moms - just goes to show that fabric can last a long time if you take care of it right. I agree some of Bonnie's instructions are weird and too detailed. You have a lot of little pieces going there

I love that you are still using your Mom's stash. If I was a Bonnie Hunter fan, I'd use your instructions - genius! Your pile of strings is awesome.
Thank you for linking up with To Do Tuesday!

These are going to be fabulous! It so nice that you have your mom’s fabric to incorporate.

2 great scrap blocks, Gretchen.
How cool you could use your mon's fabrics!

I like your String X pieces. This is going to make a cheerful quilt. Are you going to do one color blocks between the strips or will it be scrappy. This quilt looks like it would be fun to make.

I love everything you do. Your handquilting and your scrap quilting! That is really special that you still have some of your mother's fabric to use.

If there is enough of mom's red fabric, that's what all the triangles will be. I'm sure I can find another red piece if what I've pulled isn't large enough.

Mail delivery to my inbox is a day late but oh so worth the visuals!! Loved the pics of the Indian hatchet AND x blocks! Can’t wait to see both worked out!!! Excellent stitching and pressing and trimming you have been up to! I can’t wait to make a Bonnie hunter quilt myself!!!
Kathi

Great looking scrap blocks! It's wonderful that your putting fabric from your mom's stash in them. Mom would have been so happy I'm sure!

How wonderful that you still have fabric from your mom. Love the string blocks. And thank you for showing pictures of how to cut the points as I have that ruler. Can't wait to see your finished tops.

She would really be pleased because String X is going to be a charity quilt and charity was extremely important to her!

I love that you have your mom's stash and are still using it to make such pretty blocks! What a tribute to a lovely lady and quilter. Thanks for sharing on Wednesday Wait Loss.

I too make a lot of this block, not sure where the Indian hatchet name came from. I call it weave , as they seem to weave together .Here is a link to my post, the borders are scalloped! https://quiltchatter.blogspot.com/2022/04/weave-some-dreams.html