My double delight quilt has progressed to the border stage. Bonnie Hunter is well know for her pieced borders but apparently she hadn't reached that point yet when she wrote this pattern. Her borders are plain, just a wider border with 9 patches in the corners which is ok but I wanted something more interesting.

I had 3 ideas in mind for my border. Since I had so many 9 patch blocks pieced, I decided to go with that idea. I actually didn't have to make anymore 9 patches which made the borders sew faster. 9 patches on point was the idea, a 3" finished 9 patch measures 4.25" on point

I cut 5.5" squares diagonally into 4 triangles and sewed 2 of them on the sides of the 3" patches. Using triangles cut like this ensured the bias would be on the inside of the row, not on the outside. 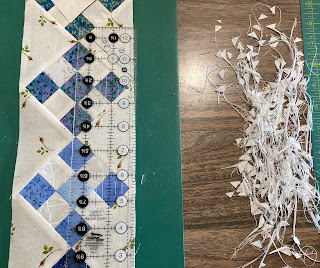 I trimmed off the dog ears after the borders were pieced.

I'm going to leave you hanging, the next post will show you the completed quilt flimsy. And no, I won't be writing a pattern to share with you. Pattern writing is not one of my skills but if I can figure out how to do this, so can you!

Double Delight is a free Bonnie Hunter pattern and is located at the very bottom of her free pattern page.

Posted by Gretchen Weaver at 6:00 AM

she has a lot of nice patterns doesn't she - many with tiny pieces!

These will be great borders. ~Jeanne

It sure is going to make a pretty border. Haha on me figuring it out! :D Love the blues.
Thanks for linking up with To Do Tuesday!

These borders will be a great finishing touch, can't wait to see them. I'm glad I don't depend on other people's patterns, it would be so limiting.I work things out on graph paper and then I'm off...

Can't wait to see the quilt you attach these to. My favorite quilts to make are scrappy, and this is a very simple idea for a border that would really make a scrappy quilt shine. I usually don't make 9 patches this small, but it would be great to use up some of the 1.5 inch scraps I've been hanging onto for years... Deb E

That’s going to be beautiful!

Such a great idea! Can't wait to see the flimsy reveal! Thanks for sharing on Wednesday Wait Loss.

For the love of geese said...

I love the nine patch border, actually I love the entire quilt. Thank you so much for linking up to Put your foot down.

Great article..I am looking so forward to your blogcomment and
I love your page on your post.. That is so pretty
ភ្នាល់បាល់​ អនឡាញ

I really like the blog and I hope people will have a new blog, thanks for the blog
wordpress
blogspot
youtube
កាស៊ីណូ