The row that was started a week ago is finished. The blue curved triangles are quilted and the stitch in the ditch around all the leaves was completed.

The left side block was finished and the left borders also.

Someone asked a question about turning the cows out on pasture. Here is an April 2020 post about the occasion. Who knew we'd still be dealing with covid a year later? 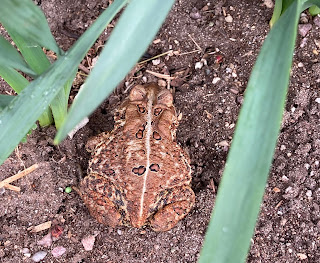 Last summer I had a toad that lived awhile in a flower pot on the steps. He disappeared during the hottest days of July and August then returned when the temperature dropped.

He was hopping around in the flowerbed a week ago. He's about 3" long from nose to opposite end, whatever that part of his anatomy is called.

I assume he digs a hole in the flowerbed to winter over.

Email ThisBlogThis!Share to TwitterShare to FacebookShare to Pinterest
Labels: Blue Stars Around the Garden, Hand Quilting

You're doing a beautiful job with that quilt - I think I would have given up on it a long time ago :p. THAT TOAD! I love toads... one of my favorite things to do with the kids is chase them in the yard, although some might consider that toad abuse - sorry!

I love seeing your progress on this quilt. It has been a long time since I have seen a toad around here. There used to be one at my mother's house. My children loved to look for it when they were litte.

I love the quilting you share most sundays... this project captivates me... Enjoy your frog watching too! I love watching how Mother Nature does things :) kathi

Your quilting is so pretty! I love watching the progress.

Yes, toads make pretty deep burrows overwinter to get below the frost line to hibernate. If it's a mild winter, they can hide in leaf litter, but around here, they burrow. I know this because one of my college roommates studied them! I know all sorts of random amphibian facts LOL.

We have toads in our garden too. They like to sit on our bubbling rock. Your quilting, as always, is spectacular!

I like to watch the toads, frogs and lizards when they are hopping or slithering across the porch (as long as they are not snakes) your quilting is amazing - such nice even stitches.

You're doing such a beautiful job on this Gretchen. I haven't seen a toad in years. Now that I think about it - it seems really weird. Thanks for sharing your little buddy with us :)

Great progress on your hand quilting, the center design is lovely. Welcome back Toad!!
Thank you for linkng up today ;)

Great progress on your quilt. It's pretty cool to see the camouflage nature has provided for Mr. Toad. Aren't they good for the garden because they eat lots of bugs? I see little frogs (only an inch at the most) around here. Sometimes they'll adhere to the windows. Pretty strange.

Beautiful hand quilting, lovely to see. No toads in my garden but plenty of lizards.

Darling dimples are growing with your quilting! Love the texture of hand quilting! Precious toad, you can order a Toad Abode online or find at a good garden center. I remember coming back to a house we had been building and beginning to weed out the flower bed, and out of the dirt came a toad, rubbing the dust from its face. Charmed! Very dry where we lived.

Those triangles are just amazing Gretchen! Your choices for quilting patterns always inspire me.