Sometimes there are things to say or show that simply don't fit with a quilting post, that is what today's post is about.

As you know, we are dairy farmers in northern Indiana. We had snow several times earlier this fall but the ground was still warm so the snow didn't stick. The week of Thanksgiving we again had snow but this time it stayed on the ground for a day. 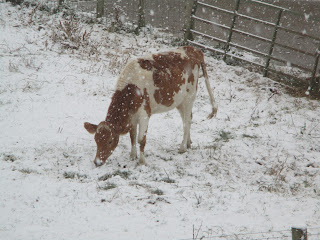 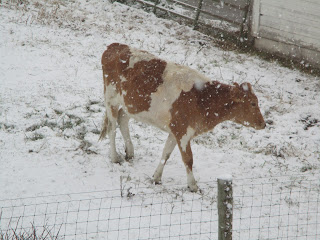 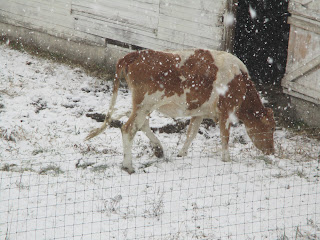 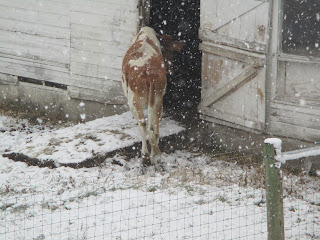 The yearling heifers in shed 2 had never seen snow before. A year ago they were babies in the west barn. I was watching them out the west window in my sewing room. Only this one heifer was brave enough to come out the door and investigate the white stuff and she didn't seem very impressed with the stuff. 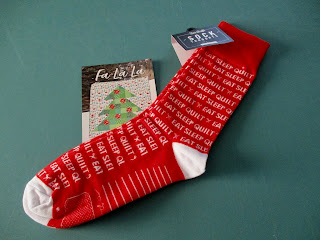 Several months ago I commented on a blog and won a pair of Moda socks from Fort Worth Fabric Studio. They say EAT SLEEP QUILT. I'm going to save them to wear at the next quilt retreat I attend, whenever that is. They also included a pattern for a cute Christmas tree quilt. 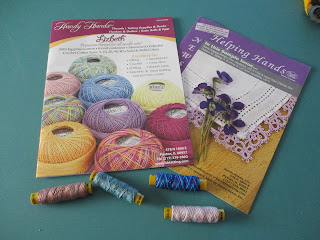 At the beginning of November, Kathi wrote in her post about Handy Hands. It sounds like a hand lotion but it isn't, it is about thread.

I requested a catalog, they also sent me a variety of thread all in different weights. A newsletter, that contains several tatting patterns, was also included. If tatting is your thing, this place is for you! 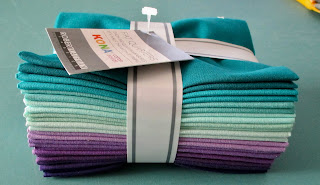 And finally, I did some online shopping at Green Fairy Quilts. I like to use Bella solids fabric when I hand quilt, Kona just stitches harder for me. I normally buy a bolt of white Bella solid at Yoder Department Store in Shipshewana every year but they have been out since spring. Green Fairy has a special price on bolts of Bella solids, I ordered a bolt of Snow and Feather. I also ordered a fat quarter bundle of Kona solids Aurora Palette which was on clearance. I didn't take a picture of the bolts of fabric but here is the Aurora Palette. This was the last bundle, I would have like 2 bundles but, oh well. I'm not sure what I'll use this for yet but I have a granddaughter who loves these colors.

Email ThisBlogThis!Share to TwitterShare to FacebookShare to Pinterest
Labels: This 'N That

What a fun post Gretchen... I would love seeing the farm vibe at your home :) I love the socks and the christmas tree pattern is perfect for fun sewing :)
while tatters will love Handy Hands... big stitchers will too if they need a certain color I think... I love how you buy a bolt of fave background fabric ... I too prefer some brands over others for certain things :)
Have a wonderful Tuesday Gretchen.. Kathi

I love seeing pictures of your farm!! Your cows are beautiful :)

Thanks for the link to Green Fairy Quilts. I've been trying to figure out how to buy whole bolts of fabric for a long time!

Fun post of "this and that"--I love seeing the cows in the snow. Reminds me of growing up. We farmed grains but always had small amount of cattle and pigs--mostly for eating and some to sell here and there. Enough to know they're a lot of work, esp in the winter! God love you!

Hi,
I'm with the cows...I don't like snow either. Love
the socks and bundle of fabric is pretty. Have a great day!

Fun socks! Fingers crossed that a quilt retreat will happen for you in 2021,

Love reading your happy blog post Gretchen. We don't have snow here in Auckland,and at our particular spot, we don't even get a frost...well maybe about 5 in 30 years. LOL! I'm going to cast on my first ever pair of socks to take with me to my son & DIL's place for Christmas. Hopefully it'll be an easy project with not too much thinking. Have a wonderful time over the Christmas break.

Hi Gretchen! That is so funny that the heifer had to come outside and check out the snow. It’s like our littles when it is raining or snowing. They can’t figure out why their head is getting wet, especially when it’s raining hard. Gosh, I haven’t thought about tatting for ages. A neighbor taught me how to tat when I was young, around 9 or 10 I would guess. That seems to almost be a lost art. I’m happy to see there are patterns and such still available. I wonder if I still have the supplies packed somewhere safe. HAHA! That Aurora bundle of fabrics sure is pretty. I’ve been getting a bolt of Bella White from Green Fairy for a few years now. It seems like we go through one in a year. Thanks so much for linking up today! ~smile~ Roseanne

It's fun to see photos of your heifer in the snow! That Aurora bundle would make a great Aurora quilt from the book Quilts of Iceland.

The Heifer was just testing the snow! LOL. You lucked out on the goodies! I prefer Bella Solids also! Love the colors in the fat quarter bundle! Hugs

We all need a little of this and that...thank you for sharing!! Love seeing the snow and the little calf is so adorable!

Fun to see the cow's reaction to snow. I'm still waiting on pictures of my son's dog's reaction - they got 9" yesterday.

Love the pictures of your heifer in the snow. Wouldn't you love to know what was going through her mind? lol The aurora bundle is adorable, I am sure you will find the perfect project.

Love looking at the yearling in the snow! Must have been so confusing for them. Love the colors in your Kona pack. Thanks for sharing on Wednesday Wait Loss.

your heifer sure didn't like the snow.......but glad she checked it out........how many milkers do you have?
Merry Christmas