The main project I worked on at the Jane Stickle retreat was Fall's Finery which I've renamed Orange Sherbet. I don't think it looks like a fall quilt, to me it looks cool and icy, like sherbet!

Here is my pieced quilt! 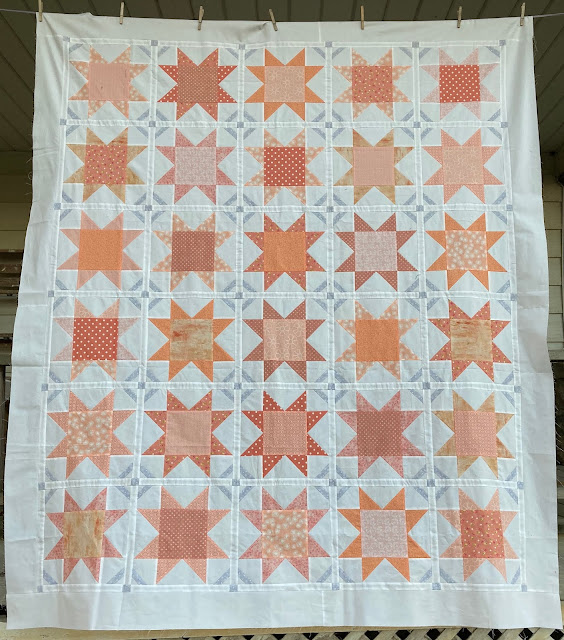 I used to subscribe to quilt magazines, but don't anymore. I've have more than enough inspiration in the old magazines! I do treat myself to a magazine or two to peruse while traveling.

Last September I bought issue 172 (October) of American Patchwork & quilting magazine. There were several quilts in the issue that I would love to make but the one that I like the best was Fall's Finery, designed by Andy Knowlton.

After I returned home, I pulled the peach fabrics I had on hand. I already had a lovely gray fabric. I did buy a few more peach fabrics to have more variety. 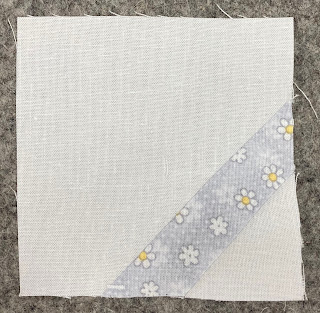 I started piecing Orange Sherbet Thursday morning after I finished the 16 patch quilt. It took me all the rest of Thursday to  piece the 120 corners for the star blocks. It was incredibly boring, a good retreat sewing project.

Since the corners were finally finished, the flying geese blocks were the next item. That is what I did most of the day Friday. The geese were made with the flippy corner method. After the first squares were sewn, I took the time to sew a second seam. The blocks were pressed and ironed to the outside. I cut in between the lines and stuck all those smaller HST's in a bag for a future project. Then it was time to sew the next square, again sewing a second seam for make a smaller HST. I have a total of 240 of those triangles to press open.

Of course Friday night was show & tell, no sewing during that. 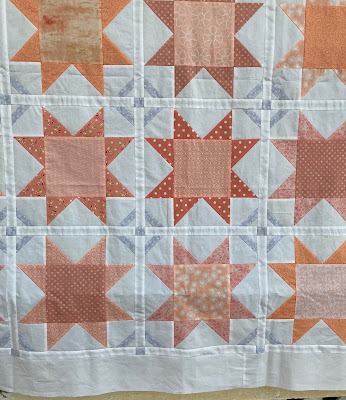 Saturday I could finally start start putting the sections together. That really didn't take long to do. The blocks were arranged on a display wall then it was time to sew the rows together. I kept on going and by 11 PM Saturday night, I had the center pieced.

Early Sunday morning the outside borders were attached and the quilt given a good pressing.

Linking to Put Your Foot Down, Needle & Thread Thursday, Peacock Party,  TGIFF!, Finished Or Not Friday, Off the Wall Friday, Brag About Your Beauties, Patchwork & Quilts, UFO Busting

So sweet and perfect for fall. Those corners add a special zing.

maybe it would be more fall like with a darker background instead of the white? But I think it looks good as is. I don't buy magazines much at all. I used to get a lot but over the years the magazines have been getting thinner and have more devoted to advertising to pay for the magazine it seems. Same goes for the local newspaper - I used to get it years ago and then stopped as there seemed to be nothing in it - small town - the other day I happened to be in a doctor's waiting room waiting and saw the most current copy of the newspaper and picked it to read it - I couldn't believe it was only 4 pages total - it used to be 8-10 - it has all gone on line now I guess - cheaper for them I suppose and they wanted a dollar for the issue - it wasn't worth 25 cents!

Wow!! You did so good! I love your quilt, it’s so pretty. I think it’s great for spring or summer. I also wanted to tell you how much I love the quilt you had on your bed at your retreat. It’s beautiful! Hugs,

I love your renamed orange sherbet flimsy! Good for you for getting it done while at retreat too!
Kathi

This is such a pretty quilt you are working on Gretchen. It would be lovely for fall or spring. Such pretty soft colors.

It is just lovely! Cool and sherbet-y looking! I too, like the gray corner detail! Great finish!

I second the notion of those corners being special. They'd have made me a little crazy, though, despite the bonus HSTs. I'd have struggled to come up with an alternate sewing approach, but I would have tried mightily. The resulting secondary design really adds to the overall look. Kudos to you.

Orange Sherbert with a touch of blue, so pretty. You certainly did well to finish this top at your retreat.

I love it!!! Orange Sherbet could be eaten in the fall - right? What a great quilt - and you were so focused!!

Your Orange Sherbet is just yummy -- and perfect any time of year!

This is very soft and pretty and it was good that you were able to concentrate on finishing it in a few days.

Reminds me of a creamsicle! It’s lovely

Wow!!! Fast piecing!!! Orange Sherbet is fantastic! Thanks for linking to TGIFF!!

3 days for a fabulous quilt! I love this peach quilt, it looks soft. Pretty corners, and sashings.
Thanks for sharing!

Orange sherbet sounds like a much better name... .. It's a lovely quilt....