One of my challenges to myself for 2021 has been to lower the amount of strips in the 2.5" box. That is slowly happening by using the strips for the 8" finished easy breezy blocks I'm sewing for the RSC.
What I haven't talked about is the smaller box that is full of 2.5" squares that I've also been accumulating for years. Of course most of the squares in that box are blues. I've been wanting to make a blue split 9 patch for a long time but just never got around to it until I saw Keryn's post about her blue split 9 patch. That was all it took for me to start one too! I love her star center! 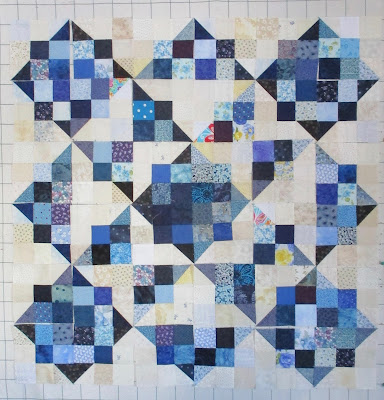 It is harder to see my star because I'm not piecing a true split 9 patch. I'm making the center a full square which changes the appearance somewhat. It would be nice if my display wall was large enough to add more of the blocks but it isn't. I'll have to wait until I have more blocks pieced then lay all the blocks out on the display floor. 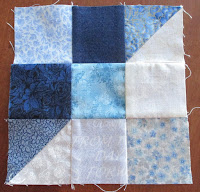 This is supposedly my new leader/ender project but it's threatening to take over the sewing room and become a full time project!
Split 9 patch was Bonnie Hunter's Leader/Ender project in 2013. Here is a link to the instructions.
When we we had the frigid arctic temperatures several weeks ago, we woke up to fog one morning! When the frozen moisture in the air touched the trees, they became frosted. 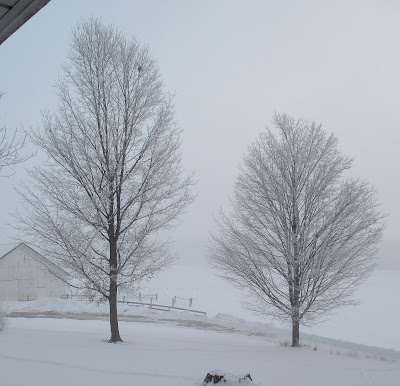 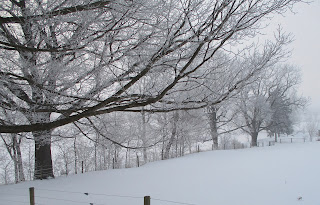 Those frigid temps are gone now and so is the snow.
Linking to Put Your Foot Down, Peacock Party, Whoop Whoop Party, TGIFF!, Finished Or Not Friday, Off the Wall Friday, Brag About Your Beauties, Oh Scrap
Posted by Gretchen Weaver at 4:00 AM

What a pretty top that will be. I need to gather ideas for my scrap boxes, other than making placemats.

I love it when everything is covered in hoarfrost. A winter wonderland. All of our snow finally melted this week with temps in the 60s. I was glad to see it go so hope we don't get more.

I won some purple and gray split nine patch blocks several years ago and have never done anything with them. Maybe I should now that I see yours and that new to me layout I like.

it is nice to have winter gone isn't it. Always nice to see a few snowy days and pretty how it decorates the tree - but I like having the windows open and listening to birds chirping. I like the blue - I too have boxes and boxes of pre-cut scraps and strips - I do use them but yet there never seems to be less in a box

Michelle @ From Bolt to Beauty said...

Pretty, especially in all those blues! I wasn't familiar with the split nine-patch. Thanks for the introduction! : )

I too, have to use up some 2.5” pieces. BH’s split nine patch has always intrigued me! Maybe that an addition to my list?
Such a long list!

I love this layout. One of my first quilts I did was with that type of split nine-patch - it's neat the different patterns it creates.

That is a great look with that block!! I like the solid centers!! and wow!!Beautiful fog and snow!

Love that pattern! I too have a pile of blues. It is one of my favorite colors!

You have made a great start with your blues.

Another gorgeous scrappy quilt in the making.

I know I'll never live long enough to make every quilt on my list. Sometimes you need to decide to pick one and make it.

I like the star center, just as some excitement to the quilt.

Blue and white, a perfect combination! And I can see the star in the middle. Glad your ice and snow is gone.

I can see why you started this project. Those blocks are lovely in blue!

Thanks for sharing with Oh Scrap!

I like your layout for this block. You made me remember I have a pile of scrap slip 9 patch blocks.
Your quilt will be beautiful in blue.